Welcome to Elmont, a community with pride

Why do some British people not like Donald Trump?

There's Power In Your Dot

We Don't Want To See Another Memorial Of Flowers and Bears

The Push Back Against The Proposed Belmont Park Arena Gains Strength

As a result of this PAUSE, our businesses and workers are going to be feeling the strain.

A Community's Struggle To Be Heard

It began with The 2008 Vision Planand continues A Seat at the...

As a result of this PAUSE, our businesses and workers are going to be feeling the strain.

And what is it to cease breathing ...

Residents of The Parkhurst Civic Association of Elmont, NY are deeply saddened by the death of...

Chet Collins - "To live in hearts we leave behind is not to die."

Why do some British people not like Donald Trump?

There's Power In Your Dot

Oh, The Clanging of Pots and Pans

Domestic Violence is NOT a private matter, It's a crime against the SOCIETY!

"SPIT" For A Chance To Win

"Spit" for a chance to win cash prizes and bragging rights. We welcome all styles of poetry,...

Jon Johnson joined the Elmont Cardinals Football Club family in 2003 and has had a front row seat to the club's recent story.  When Elmont Online talked with Johnson it was clear that he, as current president of the club, was focused on giving the community’s youth after school team sports options that promote the physical, academic and social well-being of young people and the families that are Cardinals.  “One of our goals is to produce more scholar-athletes” said Johnson.

Johnson has been the club’s president since 2005 and has steered the club, with the help of an all volunteer board, through its various ups and downs.   “More ups, thank god” said Johnson. 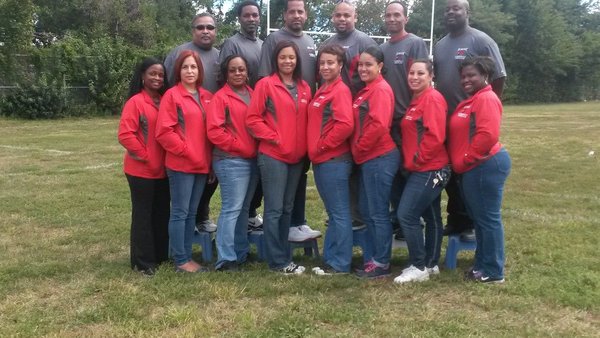 The club, formed in 1967 as a football club, has a long history of community involvement and represents one of the well established pillars of the community.  After 46 years the club points to numerous football players that have gone on to flourish at Elmont Memorial High School, Sewanhaka High School, Floral Park High School and many other area schools and clubs.  Elmont Cardinals players continue to be the source of athletic success for many area schools.  In fact it is difficult to attend an area sporting event today without bumping into an Elmont Cardinal participating as athlete and /or volunteer.

“As a Cardinal,” said Johnson, “we are focused on increasing the number of scholar athletes for local schools”.  He proudly points to the award-winning Model United Nations Team at Elmont Memorial High School as an example of where Elmont Cardinals players can be found beyond the sports fields. The Elmont Model UN Team, “[t]he China Nine set out to make the community proud and they certainly accomplished that goal.” (read more)

“There are many more examples” says Johnson and he is right.  “Some of the accolades garnered by our Cardinals teams and individual members in football are on display at the Dutch Broadway Sports Complex”.  In addition, the mantles and bookshelves of many homes throughout the community are adorned with trophies, plaques and medals earned by Cardinals children, parents and coaches.

The club has updated its name to “The Elmont Cardinals Sports Club” and is expanding programs to include baseball and basketball.  “Four years ago we expanded to basketball and the program continues to grow every year.  2013 was our most successful.  We had eight (8) full Cardinal teams playing in the Island Garden Annual Fall Basketball League.”

The conversation would not have been complete without noting the 46 year history of Cardinals Cheerleaders.  “We’re so proud of our girls!  Although we enjoy watching them on Sundays cheering proudly and loudly for our teams, we know that they have a lot more to offer.”  The Cardinal organization is actively seeking a Program Director and coaches to help expand its programming for the young ladies to include basketball, softball and lacrosse… “Our goal is to develop the scholar athlete regardless of gender”

The Elmont Cardinals is hosting its 46thAnnual Award Ceremony on February 1st at Antuns.